The Bibliophibian has fledged! Or… some equivalent word more suitable to an amphibian-sounding-thing.

If you still want to follow my blog, you’re going to need to go to the new site on BREATHESBOOKS.COM and resubscribe. There’s a couple of options there including a bloglovin’ button, so I hope you’re willing to follow me there and join me in pastures new! If not, thank you for coming this far with me.

If it helps, I’m running a giveaway on the new site here!

With the help of the wonderful Lynn, The Bibliophibian is wriggling free of the WordPress hosted cocoon and going off to seek new lands in the world of self-hosting. For the next few days, things might be a bit weird around here as we get the posts moved over and set things up. If you spy any weirdness, there’s no need to let me know.

The bookworms are hard at work!

I think this might be my favourite in the series so far. Unlike most of the other Creative Colouring for Grown Ups books I’ve seen in this series, this has background colours, which can really set the mandalas off if you pick the right colours, and the paper quality seems to be even better, too. The designs are printed on one side of the paper only, too, so there’s even less chance of colour leaking than with other books, like the Japanese patterns book.

There’s a good range of patterns, too, with various different styles. I love colouring mandalas, so that might make me biased, but I’ve really enjoyed doing the designs in this one. Especially because I have new 0.4mm markers and they work quite well with the detailed patterns.

To reach my ARC-reading goal, I need to read and review nine ARCs before December 31st is over. So this month’s reading list is mostly focused on that! I’ve made it ten, since nine as a number is just annoying to me.

Well, the three Abercrombie books are rereads too, but shush. Symmetry and stuff.

What’s anyone else planning to read this December? And trust me, I know I won’t make it to the end of this lot without a miracle. 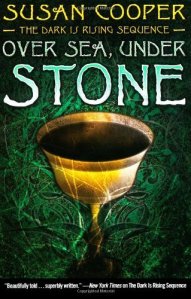 Over Sea, Under Stone, Susan Cooper

It’s time for a The Dark is Rising sequence readathon again! If you wish to join, you can do so via this blog. It’s the perfect time of year to reread the books, at least the second one in particular, with the winter solstice coming up. I always try and read them around this time of year!

With that said, here goes my millionth (ish) review of Over Sea, Under Stone. I’ve noted before that it’s basically an Enid Blyton adventure/mystery story, with Arthurian trappings. This time through, I noticed a bit more than that; despite the fact that it is much lighter than the later books in tone, for the most part, there are moments of darkness and fear: the moment on the top of the cliff with the standing stones, Barney captured, Barney in the cave, the last few pages before the epilogue… Because of that link to Arthur, because of the figure of Merriman, the seriousness that we see later in the story is still there. The Dark doesn’t go away safely in the way that the criminals always do at the end of a Famous Five book.

I think it’s partly that which makes the books survive for me — under the concerns of the children, there’s that darkness and fear.

Another thing which gets me is how all the people act like people. Jane and Barney and Simon get scared, they get jealous of each other, they puff themselves up and act important… The adults are indulgent, complacent. And then there’s the poetry of the quiet moments, the moon on the water and the quiet dusty attic and… Yeah. Brilliant writing. Not as compelling as the later books, but even here it’s very fine.

This month’s challenge in the Book Club on Habitica is reading (or rereading, in my case) Ursula Le Guin’s Earthsea books. I scarcely need the encouragement to come back and read them again, so of course, I was in for this. It’s interesting reading this first one as an adult, having gone through my own coming of age and seeing Ged as young — just seventeen! It’s also interesting because I’ve read some of Le Guin’s critiques of her own work: the lack of place for women, “weak as women’s magic”, the typical male-centred quest story. It’s interesting to think about what could’ve been changed, and how that would have changed the canon of fantasy.

At first glance, the world of Earthsea is relatively typical fantasy. Yet there’s a spirituality here, too, and Le Guin’s interest in anthropology — her references to the customs like Sunreturn and the Long Dance — give it depth. It’s definitely its own thing, not derived solely from the fantasy tradition. And I’ve thought of Ged’s flight away from and then toward his shadow in very personal terms for a while now: to me it echoes my struggle with my anxiety, the way that I was weak and unable to fight it whenever I tried to pretend it away or avoid it. I had to face it and admit it was part of me, as Ged does with the shadow he’s unleashed. And like Ged, I didn’t stop being scared of it, but I gained strength from finding the way to fight it.

(Don’t get me started on the parallels in The Tombs of Atuan between the forces of the Nameless and depression, abuse. Now that I’ve thought about it, I think I could write a paper on it.)

“Only in silence the word, only in dark the light, only in dying life.”

The theme for this week is 2016 debuts we’re looking forward to, but I’m honestly terrible at keeping track of what’s getting released, let alone by debut authors. So instead I’ll go with any books getting released in 2016.

This probably ruins me for a future list about 2016 releases, but shush.

If you know what to expect from Phryne Fisher, then this won’t really be a surprise. It’s not particularly remarkable among the other books of the series, bar a slightly less stereotyped version of a queer couple which even includes a bisexual; it’s Phryne, being awesome, not letting anyone get away with prejudice versus her Chinese lover, solving a country house mystery. The more I think about it, the more I see the various books as echoing, mirroring, making homage to other detective stories, particularly Golden Age ones. Which kind of adds an additional level of fun, if you try to play “spot the reference”.

As with the other books, I find it very relaxing and fun, even when the characters are in some danger. Cosy mystery — partly because I know Dot and Phryne and the other characters I care about are going to be alright. I wonder if, just once, Greenwood has Phryne sleep with the murderer unknowing, or has one of her lovers genuinely threatened… That might raise the stakes a little.

Of Bone and Thunder, Chris Evans
Received to review via Netgalley

Once I read some reviews pointing out this is essentially a novel about a fantasy version of Vietnam, “slyts” and all, I couldn’t unsee it. I found it surprisingly absorbing at first, though I’m generally not that interested in war stories. There are some amazing bits of description — mostly gross, but it still makes you really feel the world in which the characters live, the heat and dirt, the discomfort of riding a dragon, the futility of the fight.

But… the dull grind of it started to get to me. When they talk about this being anything like Tolkien, they really mean just because it’s got dragons. It’s basically a very thinly veiled version of Vietnam. Everything’s dirty and futile and there’s no justice in it. I couldn’t keep track of the characters, given their fantasy-fied names (which made me wonder if Evans actually bothered thinking about the language these people speak and what their naming conventions are, because I couldn’t really detect patterns), and I just… lost interest.

If you’re into war novels, though, it might be more up your alley. It’s definitely more Abercrombie than Tolkien in terms of tone, though. If you’re reading this for the dragons… to me, they were just a prop, a way of making the Vietnam War into a fantasy war.

A mostly interesting, mostly charming look at the twilight world of one of Britain’s iconic animals. It does a good job of going into the history of badgers and discussing why they’re seen as pests, when they started to be rehabilitated, even a little about one of Britain’s more famous badgers (the one from The Wind in the Willows, of course) and his author. It’s part natural history, part social history, and then veers into the modern problem of badger culling, etc.

Quite interesting, but I skipped some chapters because they didn’t interest me, and there was a slight tinge of superiority in Barkham’s attitude in some places.