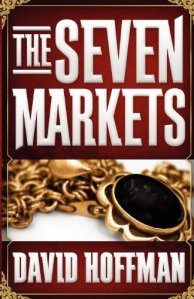 I got this as an ARC from Netgalley far too long ago. If it hadn’t been a Netgalley book, I don’t know if I’d have finished it. Maybe I would’ve; I’m stubborn like that at times. I did actually enjoy this until about halfway through, but then it stopped obeying its own internal rules, stopped explaining things — quite frankly, it stopped making sense. The idea of a story that melds fantasy and science fiction is interesting to me, so I didn’t dismiss it out of hand for that, but… everything just happened, without rhyme or reason as far as I could tell.

The structure was ambitious too, and again, I wouldn’t automatically discount it. But that combined badly with the plot, making it unintelligible. The idea of a plot of seven chapters, each following three days in each hundred years, sounds fascinating. But the jumps between were just too much.

The characters… I was ready to like Ellie, and her love for Joshua, very much. In the first chapter, it’s warm and feeling. Almost a nostalgic smile at a first love. But that warmth just dropped out of it, and for me Ellie turned out to be very unpleasant.

It’s not a bad book, per se, but I do think it was unsuccessful.