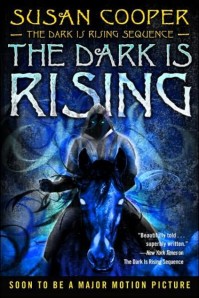 The Dark is Rising, Susan Cooper

This book has maybe one of my favourite ways of looking at England, the country and people:

“He saw one race after another come attacking his island country, bringing each time the malevolence of the Dark with them, wave after wave of ships rushing inexorably at the shores. Each wave of men in turn grew peaceful as it grew to know and love the land, so that the Light flourished again.”

It doesn’t quite work, I think: there’s the issue of colonialism, which was arguably wave after wave of the Dark coming out of our island (and the English, Welsh, Scottish and Irish have never yet sat perfectly comfortably together, there’s still colonialism at work there). And there’s, well, the BNP and the EDL, etc. But recognising that that is Britain’s identity — our genetic makeup, our language, our history — is something a lot of people forget. We can’t say “get out, foreigners”; most of us have ancestors from elsewhere, somewhere along the family tree.

I’ve loved The Dark is Rising a long time, so I doubt there’s anything new or critical I can say about it as a whole, but each time these small fragments of the narrative catch at me and make me think about them as I haven’t before. That was one of them; there are other snippets, like Will’s sudden understanding of the difference between a child’s fear and an adult’s fear (made up of understanding and care for others).

The Dark is Rising is, I think, one of those books that have a number of layers, and more so through each book. There’s a simple layer of plot, and then there’s all sorts of other stuff about understanding feelings and fears, and if you watch for it, some moral ambivalence. We’re seeing this world through Will, essentially, and he’s one of the Old Ones but he’s also a young boy, and in his horror at what Merriman has done to Hawkin, you can see a subtlety of dealing with the things the Light has done. And then Merriman turns around and shows his human face too, and just — I might, to some extent, be too willing to give these books wiggle room. Too willing to bring my own needs to the table and see the book in those terms. But I think that stuff is there — particularly as it comes up more in the person of John Rowlands in The Grey King and Silver on the Tree.

2 thoughts on “Review – The Dark is Rising”