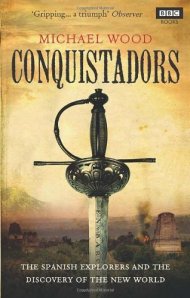 I’m pretty willing to pick up any of the books Michael Wood has written. They’re obviously more popular history than anything, pitched at BBC documentary level, but that is the level of knowledge I have for a lot of historical subjects. Conquistadors is in the usual format familiar from Wood’s book on Alexander: he retraces the steps of the conquistadors, in some cases clarifying their routes where they weren’t completely known before.

This is a period of history that’s not entirely new to me, but pretty nearly — we were taught a bit about the Aztecs and Cortes back in primary school, but that was about the extent of it. Wood evokes all this pretty clearly, though some colour photographs may have helped — my edition only has a small section of black and white ones. He uses sources from both sides of the conflict, and I think he kept a balance reasonably well. He obviously admired some of the conquistadors, but he kept in mind that even those of a more exploratory bent still thought and acted as conquistadors, save perhaps Cabeza de Vaca.

I think it interesting that one review complains of a completely one-sided view of the conquistadors “ethnically cleansing” the lands they conquered, while another complains about the British self-loathing. I think actually, there’s a pretty good balance between the two: Wood rightfully points out the excesses of the Spanish, but he also explains some of their reactions and doesn’t gloss over the issues of human sacrifice, etc.