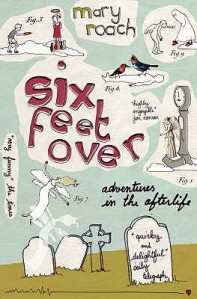 I don’t think I’m the greatest fan of Mary Roach’s style. It’s informal, easy to read, self-deprecating — but when it comes to a topic like this, I don’t want to hear all about Mary Roach unless it really illuminates the subject matter. Granted, stuff like near-death experiences and the various ideas of what happens to us after we die are things I’ve been interested in for a long time, and don’t really need an entry-level primer on. (I had to memorise the stages of an NDE as described by Kenneth Ring for my religious studies A Level.)

Still, where this deals with facts instead of impressions, it’s interesting stuff. A couple of the studies and anecdotes were familiar to me from what I already knew: I still find the case of the woman who saw the surgical tools being used on her despite having her eyes taped shut an interesting one. (It’s convincing because it wasn’t a typical tool, not something she’d have come across elsewhere, and she didn’t see the instruments before or after her operation.)

Overall, this probably isn’t going to convince you either way, if that’s what you’re looking for, but it’s certainly got some interesting snippets of information.

2 thoughts on “Review – Six Feet Over”