Skip to content
HomeReview – A Mind of Its Own 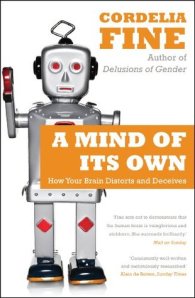 A Mind of Its Own: How Your Brain Distorts and Deceives, Cordelia Fine

If you’ve read much on the subject, this doesn’t really bring anything new to the table, but it’s presented in a readable, well-organised format, meticulously footnoted, and adopts a pretty light tone. If you’re anything like me, you’ll smile in recognition of some of the things she says — in the middle of describing the brain’s unreliability, Fine points out that precisely in line with what she’s saying, your brain is probably insisting you’re different. It doesn’t apply to you. You’d ignore the researcher in the obedience to authority experiments, you can see through your brain’s attempts to make you believe you’re better than you are.

(And if you’re honest, you’ll admit at this point that you do want to think you’re different. My favourite bit was putting some of this together. For example, when it talked about experiments where people were told that extroverts do better at something, they went through their memories and pulled out only ones that corresponded with an extroverted image of themselves. On the other hand, I ruefully thought about all the ways I am a hopeless introvert — thereby illustrating one of the brain’s ways of protecting itself from failure, by providing myself with an excuse, i.e. ‘if I’m less successful, it’s because I’m not extroverted’.)

Not revelatory, but pretty fun.