Today’s Thursday Thoughts, as hosted by Ok, Let’s Read, is on the topic of “readathons”.

Have you ever participated in a read-a-thon? If so, which one was it and what was your experience? If not, do you want to participate in one? Do you like the idea of read-a-thons? What’s your strategy going into a read-a-thon or a period of time where you just plan to make yourself read more than normal? Are there any tricks you use to encourage yourself during read-a-thons?

I love doing readathons, actually. I’ve already hosted one hourly challenge for Dewey’s 24-hour Readathon, and I always look forward to that event coming back round. Invariably, I read more than usual on that day, though I’m not quite sure why that does the trick, but planting myself firmly with books just for fun doesn’t (most of the time). I mean, it’s an activity I enjoy, so… brains, who understands ’em?

My problem in recent years has been that between my medication and my anxiety, it’s both hard to stay up and usually inadvisable. Quite often I’ll end up with intrusive thoughts, scared of random noises, etc. So lately I just read until I’m sleepy and then sleep, despite how much I’d like to keep participating.

When we’re talking less concentrated readathons, e.g. the Strange Chem one that’s coming up or ARC August, I… intend very strongly to do it, and then get distracted, usually. I need more intensive poking and prompting to keep to the goal. It helps for a week or two, but then I spot a new shiny and get distracted.

How about anyone else?

Hmm. I wanted more from this. I’m excited about the upcoming film, because it’s Marvel and they reliably entertain me (unpopular opinion: I kinda enjoyed Fantastic Four, even after everyone I know dissed it? Might have helped I watched it on my computer at 2x speed). But I’d never heard of Guardians of the Galaxy before the marketing for the film started, and I don’t know much about it.

In a way, this does feel like it tries to be an introductory volume, with little bits talking about some of the characters’ pasts and relationships, but mostly it feels fragmentary and weird. I think this is probably because I know so little about it. I felt like it was supposed to be a gateway drug, using Tony Stark as it does, but I didn’t really get that involved with it. I wasn’t sure how to contextualise it in terms of the other Marvel comics I read. Gotta admit, I would like to know what Peter Quill and Teddy Altman would have to say to each other, with some similar background behind them.

I do like the cast, and it may well be that I’d appreciate it more if I wasn’t totally new to it. I might look at it again after I’ve seen the film. Oh, and I appreciate the heck out of Freyja being the ruler of Asgard. She deserved more than the fridging she got in Thor 2.

What have you recently finished reading?
The King of Elfland’s Daughter. It’s bloody beautiful. There were some aspects that annoyed me, but mostly it all came together just right. I wouldn’t approach it as a fantasy novel, though: I would approach it as an inspiration for later fantasy, that’s maybe more at home as an extended fairytale/folktale.

The other thing was The 101 Best Science Fiction Novels 1985-2010, which is an interesting list. No more definitive than any other, I’d say, and prone to the straight white men end of the scale, but some interesting-looking stuff I hadn’t come across elsewhere before.

What are you currently reading?
Still should be focusing on The Vanishing Witch (Karen Maitland), but I’ve started doling that out in little bits instead of devouring it all at once. I feel like I’ve got an idea of the shape of the work now, so I feel less compulsion to push on through.

Mostly, though, today it’s been Michael Moorcock’s Gloriana, or the Unfulfill’d Queen. Aside from the fact that the plot revolves around Gloriana not being able to have orgasms (no, really) and the focus on sex that comes with it, I’m actually quite enjoying the creation of the alternative Elizabethan court, and the way Moorcock writes.

What will you read next?
Probably one of the ARCs I’ve got here to read: after that, I think I’ll terrify myself with non-fiction about rare brain diseases, namely Brain on Fire by Susannah Cahalan. Should be, uh, fun.

That’s not to say it wasn’t interesting in places, and I liked the inclusion of so many images to go along with the text, but it didn’t feel like there was anything to get my teeth into. I felt like it would have been much better done chronologically, even if it was in broad swathes of time: ‘early societies’, ‘the Classical world’, ‘medieval Europe’, ‘British empire’, etc. Something like that would’ve worked a lot better for me.

Also, I know he says up front that he’s not even going to touch on Eastern medicine, but considering the way we’ve imported alternative medicines as a commodity here, it would actually be relevant to talk about their development and give them some more credit.

This week’s Top Ten Tuesday is “how many books do you own the most from”. I’m gonna be totally unscientific here and just take some wild guesses.

So, what about everyone else? Strangely, Dorothy L. Sayers does not make the cut, because I borrowed my copies to read.

I really like the idea of Darwin’s Ghost, taking and updating Darwin’s groundbreaking research, and often showing how relevant it still is, how little of it has actually been disproved. Often people who criticise Darwin haven’t actually read On the Origin of Species, and so they have an inaccurate understanding of what he actually said. Steve Jones goes through all of this in quite a lot of detail, giving modern examples and correcting things where Darwin didn’t quite get it right.

That thoroughness does make the book pretty hard going, though. The topic doesn’t have to be — I’ve read another explanation of the early transmission and spread of HIV, for example, which wasn’t boring at all (though it had other faults) — but Jones’ writing ends up feeling rather stodgy. I’m completely fascinated by the subject, and reasonably knowledgeable about it, so if I thought that… I don’t know what other readers would make of it.

The main effect seems to have been to make me really want to read On the Origin of Species; I’m told that Darwin’s prose is quite readable and even interesting, and comparing it to the view of it I got from this book will be interesting.

I’m already signed up for one readathon this August, but hey, what’s one more…

I know that there’s a couple I must get to, because they’re being released soon or have already been released.

I will probably not stick solely to this list, especially since I’m doing Strange Chemistry reading month too and I still have books they gave me to read, but it’s a start. In fact, I’m gonna make this list a to-do goal on HabitRPG, just to give me that bit more of a kick in the butt. (HabitRPG is great. Addiction, I have it. Check it out if gamifying your life, including small tasks, sounds good.)

Delete This At Your Peril, Neil Forsyth

I picked this up at the library because I needed something light, and the humour reminded me of my dad a bit. I can imagine him stringing along a scammer in this way, though I think he’d be more subtle and clever about it. It’s amusing enough at first, in this case, but after a couple of exchanges I was skimming them all and shaking my head at the reductio ad absurdum of some of it.

I wouldn’t buy this, but it might be worth a flick through if you’re looking for something funny.

I never actually finished reading this, because by the time I was halfway through, I was actually getting better. I’m returning it to the library now because I think it may be useful for other people, and right now, I don’t need it.

That said, I did find a lot of comfort from reading Ingham’s assurances that you can get better, and will gladly add my voice to that. The prognosis for someone with panic attacks improves if you know from the start that you can get better, and I’m here to assure you that you can. As my counsellor pointed out, I may always be an anxious person, and that means I have to work a little harder, but it’s possible. See also my Mental Health Awareness Month post for more about my personal journey.

The book itself is easy to read and encouraging, without minimising the fear you may feel if you have panic attacks. I had quite a few pages bookmarked in the half that I read. But really, like I already said, I think the most important thing was that it told me I could get better, when I wasn’t hearing that from a lot of people. And it told me I wasn’t alone.

Time for Stacking the Shelves! I have not bought books this week! I have been to the library three times, though… Still, this is a much smaller haul than it could be, knowing me. (If you don’t believe me, go back and check last week’s.) 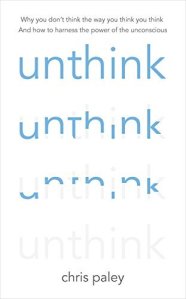 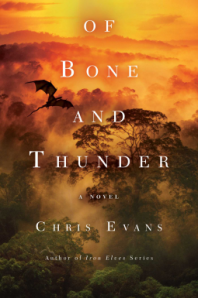 I’ve already read Unthink; I’m being pretty good at keeping on top of my books from bookbridgr. The next two are from Netgalley, and the last one direct from the author. Thank you to everyone involved in giving out ARCs and review copies! 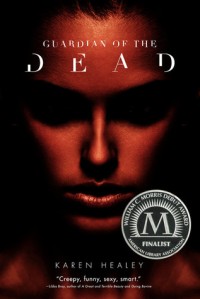 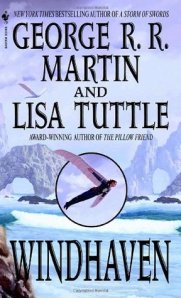 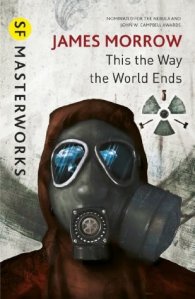 The first two I actually own; Guardian of the Dead I own in Kindle format, though, and I only really use my Kobo lately, and Windhaven is… I think I’ve owned it in ebook for about five years, probably longer, and the site I bought it from has shut down leaving me with no access. So. Libraries! Then This is the Way the World Ends (I’ve checked the title and it should have the is in it; why the SF Masterworks cover omits it is anyone’s guess, though the physical copy I actually got has it right) doubles up for two of my challenges, one to read ten new-to-me SF Masterworks, and one to read all the books recced in Science Fiction: The 101 Best Novels 1985-2010, which you’ll see below.

I’ve been meaning to read The Better Angels of Our Nature since I did the Everyday Moralities class on Coursera. The humour of Delete This At Your Peril reminds me of my dad (look it up, Mum — you’ll agree). I’m planning to read all the 101 SF novels recced in the third book here; not because I think it’s particularly better than any other book of recs, but because it spans twenty-five years and contains a lot I haven’t read yet/need to reread.

As for Philippa Langley, well, I’ve heard that she’s a bit… over-enthusiastic about Richard III and that she came across slightly batty on the documentary. So far the book isn’t contradicting that impression. Still, apparently Michael Jones’ chapters are worth it.

So, what’s everyone else been up to? Have y’all been good or bad this week with your buying habits?