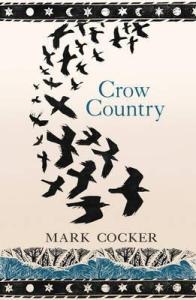 This is a book more about a personal, anecdotal, observational understanding of crows than a scientific one. It tells us, perhaps, as much about Cocker as about the corvids. It’s written in a lyrical sort of way, with plenty of Cocker’s own sense of wonder communicating itself through his breathless and admiring descriptions. I think he’s achieved what he set out to do, in that I want to go out now and find a rookery, watch some jackdaws, learn the differences between all the British corvids and their calls. It goes to show that you don’t just catch people’s interest with exotic birds: that there’s a lot of richness and mystery right under our noses.

I liked that he included references to crows in literature and imagination, the word-of-mouth descriptions of events like a rook’s parliament, etc. He indicates where this does seem likely to be mythical, and likewise where it might be rooted in fact, so that overall you get an image of the bird as we imagine it as well as the real creature.

I wonder if anyone who has read The Dark is Rising can read this book too without thinking about those attacking rooks, the birds of the Dark, and what Cocker would make of them…