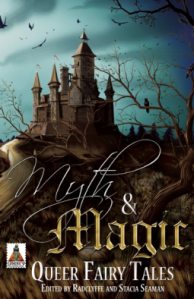 Myth and Magic, ed. Radclyffe and Stacia Seaman
Received to review via Netgalley

Normally I quite enjoy queer retellings of fairytales — I’ve written a couple, because it’s just fun to take such a familiar story and wring the heteronormativity out of it. I’ve enjoyed stories like Malinda Lo’s Ash greatly. But most of these took the same sort of tone, flippant and trivial — which is fine, but not what I’m interested in right now. There are some fun ideas, some humorous bits, but there’s also some aspects that make me wince: the idea that only one sort of boy (a gay one) would wear a felt scarf to dinner. Whaaaat? Stereotypes, really? Gah.

It wouldn’t be so bad if those stereotypes weren’t still harmful. In so many ways, it’s ridiculous to look at someone and say, “Oh, you look gay.” Or whatever. It’s not funny yet because it’s still so harmful.

Shrug. Mostly left me cold, though some of the stories were better than others.

2 thoughts on “Review – Myth and Magic”