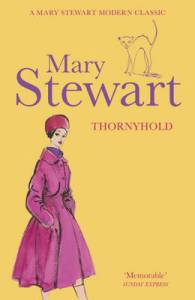 Compared to Stewart’s other romance/mystery stories, this is rather gentle. It’s more about family being there for you, about everyday magic, about finding yourself at last and fitting yourself into the world. The protagonist, Gilly, really hasn’t had a chance to grow up, or at least to grow out of her parents’ expectations, and here she finds space to do exactly that, thanks to the cottage left for her by her godmother.

It honestly sounds at some point like there’s something more sinister going on — and to be honest, the antagonist’s plan is kind of creepy and weird, and there’s animal abuse that really mustn’t be discounted as harmless that I think kind of gets waved away by the ending. And the fact that the antagonist’s plan doesn’t end up working on the intended target, but does work on an unsuspecting and previously uninterested person… hm. That’s kind of not a happy ending, not a reason to relax. If you’re going to have a world where something like a love potion works, and the protagonist is concerned about it up to the point where she meets the man she wants… Hm.

But really, that’s bringing serious issues from fantasy stories into a primarily-romance story, where it’s meant to be unproblematic. So I let it go. (Pause for musical interlude.)

Not my favourite of Mary Stewart’s books (although honestly, I don’t know what I would pick — maybe The Ivy Tree, or Nine Coaches Waiting?) but fun enough when you take it as a gentle romance story with a little tang of mystery and magic.