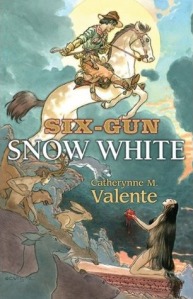 This is quite different to Valente’s other work in some ways, and very much of a piece with it in others. All good ways, I think. Her talent with words is very much apparent, but in some ways this is moderated a bit from the super-rich, super-intense poetic language in her other work. Every bit of it feels targeted: bang, bang, bang. The narrative voice is, to me, similar to that in Charles Portis’ True Grit: how well it compares in general with the rest of that genre, I wouldn’t know.

For me, this version of the story works surprisingly well. I’m not especially precious about retellings (aside from King Arthur retellings, and only then when I think someone is completely ignoring the cultural background), so I wasn’t bothered by the changes, and I loved what Valente did with this. It’s both something new and something truer to the “original” story than a lot of other versions I’ve seen.