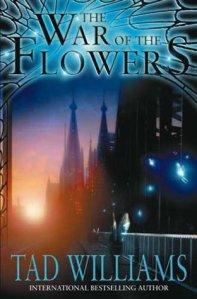 I read this book a long time ago — it was the first book by Tad Williams that I read — but never wrote a proper review for it. Both times I’ve read it I ate it up in about two days. The writing was pretty good — or it tasted good, anyway, from a synaesthete’s point of view — and the plot was interesting enough to draw me on and make me read it in great big chunks. There was something unmemorable about it, though. I have a pretty good memory, like my dad, and my dad is one of those guys who can tell you what happened in an obscure episode of the old series of Doctor Who that hardly anyone even remembers seeing. But I just didn’t really remember what happened in this book, so reading it again was actually mostly discovering things all over again.

One of the things I like a lot about the book is that it isn’t some great multi-volume epic with hundreds of characters. You stay focused on one main character throughout and don’t go off on too many tangents. Speculative fiction seems to, by default, come in trilogies, which drives me a little mad when I want a relatively simple/quick read. Unfortunately, this can be a bit of a pitfall, too. The War of the Flowers is pretty dense, and the main character, Theo Vilmos, is a bit slow and a bit of a jerk. He seems to sort of mean well, but he keeps saying and doing the wrong things.

There are some pretty awesome supporting characters — particularly Applecore, who is a little sprite with a foul mouth and a temper and, despite an odd soft spot for Theo, she calls him on his behaviour a lot. There’s a lot of other interesting characters, both good and bad, although some of them are more concepts than fully realised characters — for example, the Terrible Child.

There is also a lot of world-building packed into the book. Because parts of it rely on political machinations, there’s a lot of social/historical background packed in. It’s also complicated by the fact that Williams uses the old stories about Faerie, but his Faerie society is what we would consider to be more advanced: out of the medieval era into the world of “electricity”, etc. I liked the world he built quite a lot, although the obvious parallels with our modern world were somewhat intrusive. I don’t know how much it was intended to be a commentary on our world, but some parts felt rather pointed.

Overall, I think it could have been a shorter, slicker read, but I kind of liked the slow build. I’d say it’s just good summer holiday reading, but I know the first time I read it I read in the gaps between classes and so on, so it’s not something you can only stand if you settle down with it in the evenings or whatever. Depends how you read, I guess.