If you’re enjoying the series, then this is basically more of the same sort of tone and plot, relationships, etc. There are a couple of nice developments — Biffy and Lyall’s relationship is particularly nice, and if you’re a fan of happily ever afters, then Conall and Alexia have a solution to something that was a problem, mostly unspoken, from the beginning. It ties up a lot of plot threads, including stuff about the God Breaker plague, Floote’s mysteriousness, and Alexia’s father.

Plenty of drama drama, silly nicknames and sex-positivity, and general silliness. I’m glad to have finished the series, but I’m a bit reluctant to jump into Prudence… The silliness has always been a touch beyond my interest, and I’ve heard other critical things about it. We’ll see. I do own it, so I might as well try!

Hmm, this week’s theme is about recommending stuff you like if you like something popular, and I’m never sure about what’s actually popular and what I just know about because I’m in my own little circle. So I’m just going to suggest some readalikes.

I’ll be interested to see what other people are recommending here! I found this one difficult, because I’m never sure how to judge other people’s taste.

Heartless is still pretty fun, but the humour of these books is getting a little tired. For one thing, it relies on apocryphal stuff about the period (no, table legs were not considered indecent) and silly humour. And a lot of the humour in this book is basically “haha, Alexia is pregnant and huge, hahahaha”. I get that it’s a bit difficult to have Alexia up to her usual tricks without some glossing over of the fact that she’s eight months pregnant here, but yeesh, stop hanging lampshades on it, we get it.

I didn’t think much of the mystery plot, either. Mostly because I didn’t believe that particular character would be so rash and stupid, when we know they’re fearsomely intelligent. It’s like spectacle took second place to believability — which isn’t surprising for the Parasol Protectorate books, since they’re knowingly absurd, but there’s a point where it becomes too much.

What did I like about this book? Well, Genevieve’s love for her son; Akeldama’s relationship with Alexia continuing to be special; Biffy and Lord Akeldama’s doomed love; Alexia’s grit; Professor Lyall. I remain fond of the characters here, primarily, while aspects of the world/writing are really beginning to drive me round the bend — and I wasn’t 100% on board to begin with. Probably not even 60% on board. I’m not fond of absurdity, really.

I am going to read Timeless, because there are some character developments I look forward to, and at least Alexia won’t be pregnant anymore.

Hm. I wish Conall had been made to grovel rather more than this, after his reaction in the last book; I especially wish that his horrible comments to Alexia weren’t just stupidity and were actually driven by a real fear of betrayal. That would make me feel less annoyed if he had some foundation for the way he treated her. Gah. Still, this book does allow Genevieve, Floote and Professor Lyall to shine. And get up to hijinks.

The series continues to be absurd, fun, and relatively inconsequential, with some surprisingly sweet moments — Biffy and Lord Akeldama, ach, right in my feels; Vieve’s caring for Alexia — and some things that can’t help but make you laugh. I mean, for example, this bit:

Alexia found herself surrounded and embraced by a room of such unmitigated welcome and personality that it was akin to being yelled at by plum pudding.

Just. What? And yet it makes sense somehow, in the absurd and over the top context of the Parasol Protectorate (words which were finally used in this book).

This series continues to be fun, rather absurd, sometimes witty. The pack dynamics are interesting, etc, and this book features characters I already met in the Finishing School series. It’s a little odd to see them as adults, but I rather like seeing Sidheag again, and especially Vieve. I loved the part she had to play and the way queerness is just a part of this world, sex is not dreadfully horrifying (because as most people know, the Victorians weren’t actually, well, Victorian about it), and the way roles in society change because of the supernatural set is quite interesting. (Also interesting where it does not change, but instead fashions and such of the period are explained by the supernatural set’s presence.)

On the other hand, the end of the book just irritates the living daylights out of me. Everyone is entirely unreasonable, nobody bothers to think oh hey, maybe things are different with a preternatural than a human, and any love or trust between Conall and Alexia is just chucked out the window. I hope to goodness that this doesn’t get smoothed over with some nibbling and bodice ripping; I care enough about the characters to be outraged, so I hope Carriger keeps faith with readers and deals with this plotline in a way that does them justice.

Like Soulless and the Finishing School books, it’s fun and easy to read, and while I’m not wildly in love or unable to do without the thought of these books in my life, they’re enjoyable and a little bit addictive for me. Blameless is within arm’s reach right now, and I might just go with that impulse.

Like the first book, this YA book set in the world of the Parasol Protectorate is a fun romp with slightly less sex talk than the Parasol Protectorate books. It still has a bit of romance, but it’s mostly banter in keeping with the age of the girls, with a touch of teenage confusion and angst as regards having feelings for anyone. They’re not books with great depth: the perfect description is a ‘romp’, as many people have said before me.

It annoys me that people complain about Sophronia being a ‘Mary Sue’, when a boy doing excellently at school in the same way wouldn’t be questioned. This is what she’s good at, with the help of her friends, and without them and some helpful coincidences, she wouldn’t be so good at what she does. Nor is she gracefully immune to everything the other girls say or think — she can be hurt by them, and do them injustices.

So yes, it’s a little piece of fluffy wish fulfilment. And it’s fun, and positive about female characters who can stand up for themselves and take care of themselves.

Good morning, folks! After a busy couple of weeks, I’ve been good this time. I had one library trip, and didn’t buy anything for myself when I went shopping. (Unless you count accessories for my Captain America teddy bear. Shush.)

Yes, you can clearly see what I’m in the mood for at the moment!

Aaaand comics. Two single issues, and the TPB of Ms Marvel, which my sister bought me. ❤

What’s everyone else been getting?

A somewhat acquisitive week for me! But at least I’m keeping from requesting loads of ARCs, given I have a challenge to meet that means reading 55 of them already… (Yes, that’s not even all my backlog. Just 30% of it. I am awful.) 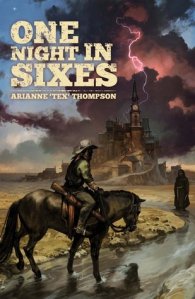 The first three, well, I planned to get them anyway, since I’m enjoying both series. The Tanya Huff I’ve been eyeing for ages. And One Night in Sixes is a bookclub read, if I recall rightly. 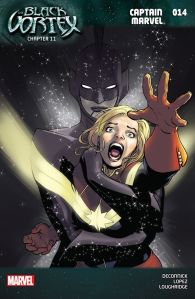 Looks like a tie-in event for Captain Marvel? Might not be so fond of that… And I am getting tired of seeing Carol looking terrified/helpless on covers. Spider-woman looks fun, though.

How’s everyone else doing? Up to anything interesting?

I originally read Soulless a while ago, and I didn’t know much about it — just that people found it a lot of fun. And I think I was still being snobby about overt romance in fiction, before embracing my love of Georgette Heyer and Mary Stewart (not that this is solely romantic fiction in that way, though it does share some of the features, like a plucky single heroine who is a spinster, etc, etc). Anyway, I thought it was kind of fun, but I wasn’t really prepared to enjoy it for what it was.

This time, I knew it was often ridiculous, would make me laugh, included a rather shocking amount of bodice ripping detail, etc. And I was prepared to enjoy it for that — and somehow that made it easier to focus on the bits of world-building around that: hive politics, pack politics, human politics, the changes Carriger’s made to history to fit in vampires and other supernatural creatures. I guess in a way it stays disturbingly imperialistic and so on — Victoria is queen, it’s a golden age, silly America is kind of backwards, etc. But really we don’t see much of the rest of the empire; it stays pretty parochial. Maybe the word should be territorial?

The mystery is terribly easy, though, especially the second time around. That’s not so much any actual clues as the fact that the author slaps a certain element into every couple of scenes. It’s not exactly subtle as a Chekhov’s gun.

Still, I’m happy to read this as light fun; as a friend said before, it’s a cream puff of a book. And that’s fine. And hey, the positivity of the sexuality between Conall and Alexia is actually pretty positive, and it’s nice that Carriger doesn’t milk angst out of it with too much obsessing over Alexia’s reputation, etc. 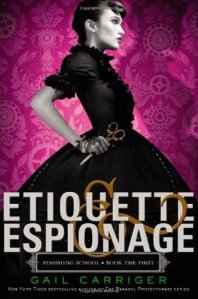 I read Soulless a while ago, and liked it enough that I had a vague intention of reading more, but not so much I was in a hurry. Likewise, I only really picked up Etiquette & Espionage because I know that Carriger’s work is pretty fun, and it was in a 3 for £5 deal in the Works. And then it languished on my to read pile for… well, just over a year. But I was feeling a bit bleh about the other books I had lying around, so I decided to just go for it and try this — and I promptly read it in one go.

It’s not a book I love like I loved, say, The Goblin Emperor. It’s more like frothy fun. It works well for that, though: 19th century sensibilities in a steampunk alternate history, girls learning to be spies, and a sprinkling of adventure. I liked Sophronia; she’s not perfect, but she tries to be decent, she doesn’t have prejudices, she does her best for the people around her, and she lets nothing get in the way of her curiosity. I guess the best term might be ‘spirited’, which does make me sound like some faintly disapproving adult…

It’s fun, and I’d definitely recommend it to teens who want a bit of adventure and supernatural stuff, without accompanying sparkles or plagiarism. (Sorry, they’re easy targets.)