What have you recently finished reading?
The Younger Gods (Michael R. Underwood). I wasn’t really impressed, sadly. Before that I read Venomoid (J.A. Kossler), which was similarly unimpressive. Both books for review, alas.

What are you currently reading?
Fair Game (Josh Lanyon), in preparation for reading the sequel for review. I’m at least sure that that’s going to be fun; Josh Lanyon is like my brain’s cheesecake. I’m also reading The Old Ways (Robert Macfarlane), because the title makes me think of The Dark is Rising (Susan Cooper), and Galapagos (Kurt Vonnegut), because that’s on my list of 101 sci-fi books.

What will you read next?
ARC-wise, I need to catch up with the Flavia de Luce books and review the most recent, so that’ll probably be soon. New book-wise, either Clariel (Garth Nix) or Maplecroft (Cherie Priest), because I’m excited about both. Library-wise, probably The Bone People (Keri Hulme).

My life is complicated, y’all. 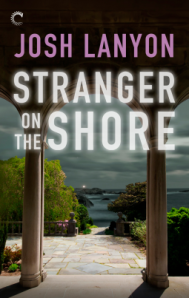 Stranger on the Shore, Josh Lanyon

Received to review. Josh Lanyon’s a writer I’m always happy to curl up with — well, with his books, anyway — in pretty much the same way as I’d read Mary Stewart (before I ran out of her books). Mind you, I don’t think Mary Stewart featured a single gay character, while I don’t think Lanyon’s written a non-gay romance.

This was fun, in the way I usually find Josh Lanyon’s books: a bit of tension, sparks flying between the romantic leads, etc, plus mystery and unexpected danger, etc. I usually work out his plots pretty quickly, and this wasn’t an exception. The clues were a bit too obvious. Nonetheless, the exact identity of the murderer was a bit of a surprise, because I didn’t particularly have anyone nailed down for that.

The romantic relationship… For the most part, it worked for me. I could believe in the characters’ complex feelings, and in their connection. But, Pierce fell into the same trap as many romantic leads in YA books and so on (an odd comparison to make, I know). There were traits that were supposed to make him sympathetic in an odd way, but which led to rather creepy things. Like, having sex with someone to get their DNA for a test. And then entering into a real relationship with that person without ‘fessing up. Just, ugh, sure Pierce is supposed to have trust issues, but I don’t see how that makes it any better for him to violate someone else’s trust.

I am not going to quote from the sex scenes, but only one of them made me giggle, which is a start. There are some things that should never be compared to silly string or smashed champagne bottles, I’m just saying.